GRP has two component parts - The Glass and The Plastic. The idea is as old as mankind itself. A house can be built from mud bricks, but it will crumble unless another material is added to the bricks to bind the mud together. Chopped straw provides the strands which hold the bricks together.     Below. Structural steelwork

In a more modern example, a skyscraper could be built from concrete alone, but as soon as the wind blows it will crack and fall, unless it is strengthened in some way. The builders use steel girders, steel rods and steel mesh to provide the strength that the building needs. The concrete fills the gaps between the steel mesh to give a smooth unity to the structure and to protect the steel skeleton inside from destructive contact with the elements outside. The initials GRP mention the two components in the name, the binding glass mesh and the plastic bonding material.

The plastic most readily available is called polyester resin and it comes in a liquid form. It is not often that you buy liquid plastic, so it is unusual. There are other resins, especially epoxy, but we will stay with this basic, cheap, polyester for the purpose of the explanations that follow. In order to set the plastic another chemical is added to it (catalyst), that will generate heat inside it, to bake it into its solid form. Any strengthening strands that are put into it must be able to withstand this baking process and still remain strong. This why straw, wool, cotton etc. are of little use as they become brittle in cooking and why strands of glass that are resistant to the heat are used.

We are familiar with GRP moulded hulls and decks and most of us realise that the real cost of producing a GRP craft is in the making of these moulds to a very high standard. It is difficult to justify the expenditure of a mould if only one boat is to be made. 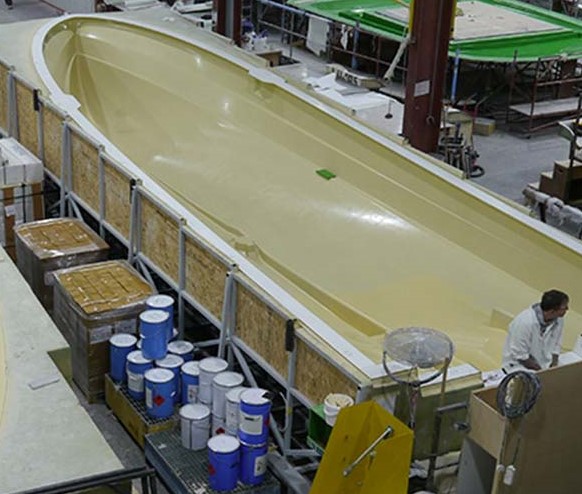 Making fibreglass boats has evolved since the materials became easily and affordably available. Initially, straight copies of previous, wooden-boat designs were made. The builders often made overweight craft as they used GRP lay-ups the same thickness as the wood they were replacing. The glass mats used were similar to the straw that might have reinforced the mud bricks previously mentioned. The individual strands were chopped short and randomly directed, giving rise to the name of the glass matting used as Chopped Strand Mat (CSM). Thick and heavy lay-ups were also used to try to overcome the problem of the flexibility of fibreglass, but weight is usually counterproductive to performance.

To make a fibreglass structure stiffer it needs to be designed properly. A flat piece of GRP sheet is very flexible and adding more layers does not really help to stiffen it. GRP can be considered as being similar to a piece of paper for design purposes, so creases and corrugations will stiffen it; rather like corrugated-iron roofing sheets. Moulding, simulated-clinker dinghies in GRP is a good idea as they have hulls with ridges. Vehicles have 'creased' body shapes to add stiffness to thin metal panels. Making a curving arch like the shell of an egg, on the bottom of a boat, is a good idea. If a flat area is unavoidable then it must be stiffened with ribs and stringers from behind. It didn’t take long to discover that stiffening ribs could be moulded in place by using paper-rope. The paper had no strength, but it made a former for the fibreglass to be shaped over it, to create a stiffening shape. 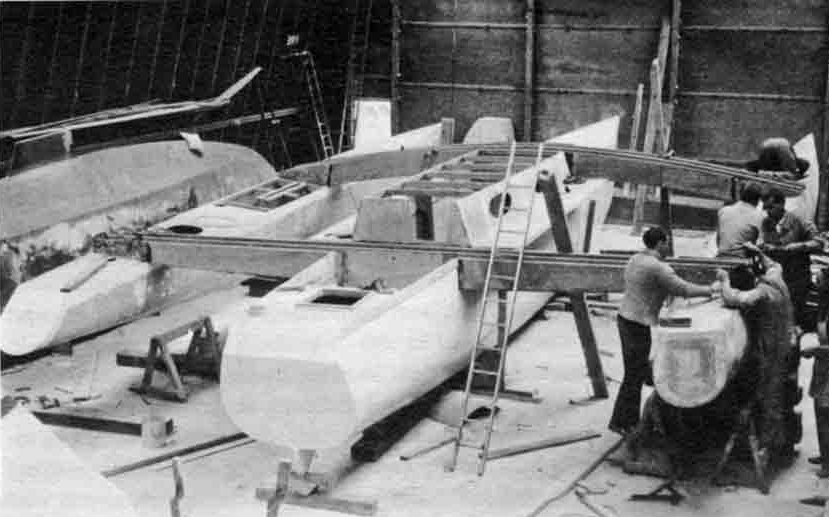 The foam-sandwich boat building technique was introduced to Europe by a man called Derek Kelsall in 1964-65. In 1964 he had sailed in the Trans-Atlantic Singlehanded Race in a conventional plywood trimaran. During the crossing he studied the way his boat related to wind and waves and conceived a new design form for trimarans. He had been employed in areas allied to the oil industry and had seen foam sandwich storage tanks constructed. Upon his return to England he decided to make his new boat using this innovative technique. The trimaran he built, called Toria, had an outstanding performance. On its first major race Round Britain, 1966 it left all the opposition wallowing days behind. The first monohull was four and a half days behind. The boat’s performance alerted the sailing world to a revolution about to happen. 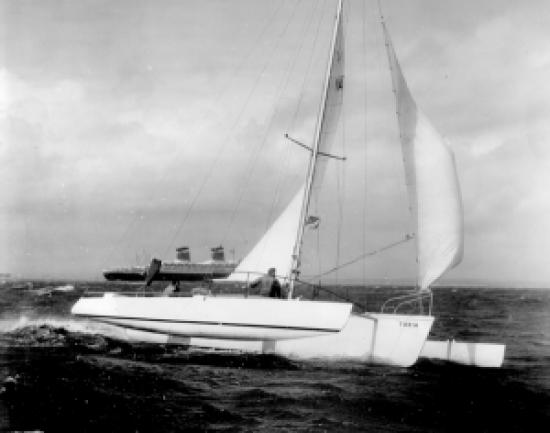 Left. Toria under sail            Serious racers beat a path to Derek Kelsall’s door and he became a boat designer and constructor based in the aptly-named Sandwich Marina, in Kent. Kelsall asserted at that time that the material imposed no restrictions on the designer, ‘We can produce any shape required - at a reasonable cost for one-off.’ For the first time he had found a way to build single craft in GRP without the huge, financial barrier of moulding that had previously existed. Since then, there have been many craft built with the material, but it is worth spotlighting just a couple of the early ones. Sir Thomas Lipton was a 56ft monohull in which Geoffrey Williams was the elapsed-time winner of the 1968 Trans-Atlantic Singlehanded Race. This boat became the prototype for the Ocean Youth Club boats which followed. Another early craft was Great Britain II built by Chay Blyth for the first Whitbread Round the World Race which made the fastest circumnavigation of the world at that time to become the elapsed-time winner. This craft was a 78ft (ketch originally) built by Blyth and his paratroopers in Kelsall’s shed, proving that amateurs could use the medium and big boats could be made with it. Craft such as these had very heavy use and proved the durability of the system. A significant visitor to Kelsall was Eric Tabarly who immediately understood the potential of the build and the multihull craft. He took the message back to France where the technology is still being pushed to the limits in record-breaking craft.   Below.Great Britain II